Will SF housing market be overwhelmed by IPO...

Will SF housing market be overwhelmed by IPO millionaires?

Marco Carvajal, a long-time real estate agent with Vanguard Properties, says the city’s upcoming frenzy of initial public offerings (IPOs) has become an everyday topic of conversation among San Francisco’s very plugged-in residents. Over the next two years, some of the decade’s biggest tech firms, among them Pinterest, Uber, and Airbnb, are expected to go public, with Lyft alone just announcing it would seek a value between $21 and $23 billion. Talk of IPOs and potential IPOs has everyone thinking about money, home values, and the threat of another prosperity bomb accelerating the city’s already sky-high cost of living.

“When I go to the dog park, my 75-year-old neighbor starts to drill me on how the Pinterest IPO will impact the value of her home,” says Carvajal.

The Bay Area is no stranger to tech firms, money, and the instant wealth created when startups go public. When Facebook and Twitter went public in 2012 and 2013, respectively, the region quickly found itself home to roughly 2,500 new millionaires.

The upcoming IPO storm of 2019 and 2020, expected to include eight to 10 major companies, may dwarf that. Many estimate that at least 6,000 new millionaires, some of whom are sure to seek out housing upgrades, will be clustered within a relatively small city that sells roughly 6,500 homes a year, according to Patrick Carlisle, an analyst for the real estate company Compass.

Carvajal expects many of these new millionaires to drop money on new homes, since so many have been stuck in a familiar Bay Area trap: paying stratospheric rent for apartments near the office without having enough left over to save for a down payment. Many of his clients, who didn’t want to be quoted for this article, can’t wait to stop paying someone else’s ridiculous mortgage and start paying their own.

All this new tech money will change the market. But the frenzy many expect won’t come to pass, he believes.

“This IPO rush isn’t going to be a bonfire,” says Carvajal. ”You’ll be adding kindling to the fire the entire year. It’s going to be a constant burn.”

Are there any limits to the Bay Area boom?

A recent New York Times article asserted that “San Francisco Will Drown in Millionaires” once the IPOs start taking place this year, and painted a picture of newly flush software engineers bidding for $5 million single-family homes. Recode estimated late last year that this unprecedented string of big-name IPOs will create a new wave of public companies worth more than $100 billion in total. All that new money has “got to go somewhere,” and might as well go toward high-priced real estate.

There are already plenty of things for these newly minted tech stars to spend their money on, including funding the next wave of startups. But San Francisco’s many real estate analysts, along with academic researchers looking at the impact of past IPOs, don’t foresee as wild a ride in the housing market, or huge upward price fluctuations, as some have suggested.

“What they say is going to happen isn’t going to happen,” says Randy Shaw, a San Francisco housing activist. “They continue to spread fear without mentioning the full story. Cities aren’t helpless to combat affordability; they just need the right policy. There are currently 1,100 affordable housing units being built in the Mission, either under construction or in the pipeline.”

Instead of causing next-level bidding wars over the city’s few available homes, the IPOs will likely be a countervailing factor in a market that’s cooled since last spring, says Carlisle at Compass. He feels the fear of new money radically re-reshaping the Bay Area is overhyped.

“We’re just bumping our heads against the limits of affordability, which continued to be the biggest social and political issue in the Bay Area,” says Carlisle. “Buyers are looking at a 1,500-square-foot ranch house and going, ‘No, I don’t think I’ll spend $2 million for that.”

Anecdotally, Carlisle and others have heard from buyers and sellers that the market is already anticipating the IPO wave. Some buyers, fearful of being shut out when new tech wealth, and all-cash offers, push them out of the housing market, are rushing to close. Some sellers are holding off, waiting to get better prices later this year. Carlisle told San Francisco Chronicle reporter Kathleen Pender that 2,493 listings across the Bay Area were withdrawn or expired in December, compared with only 1,154 in December 2017. 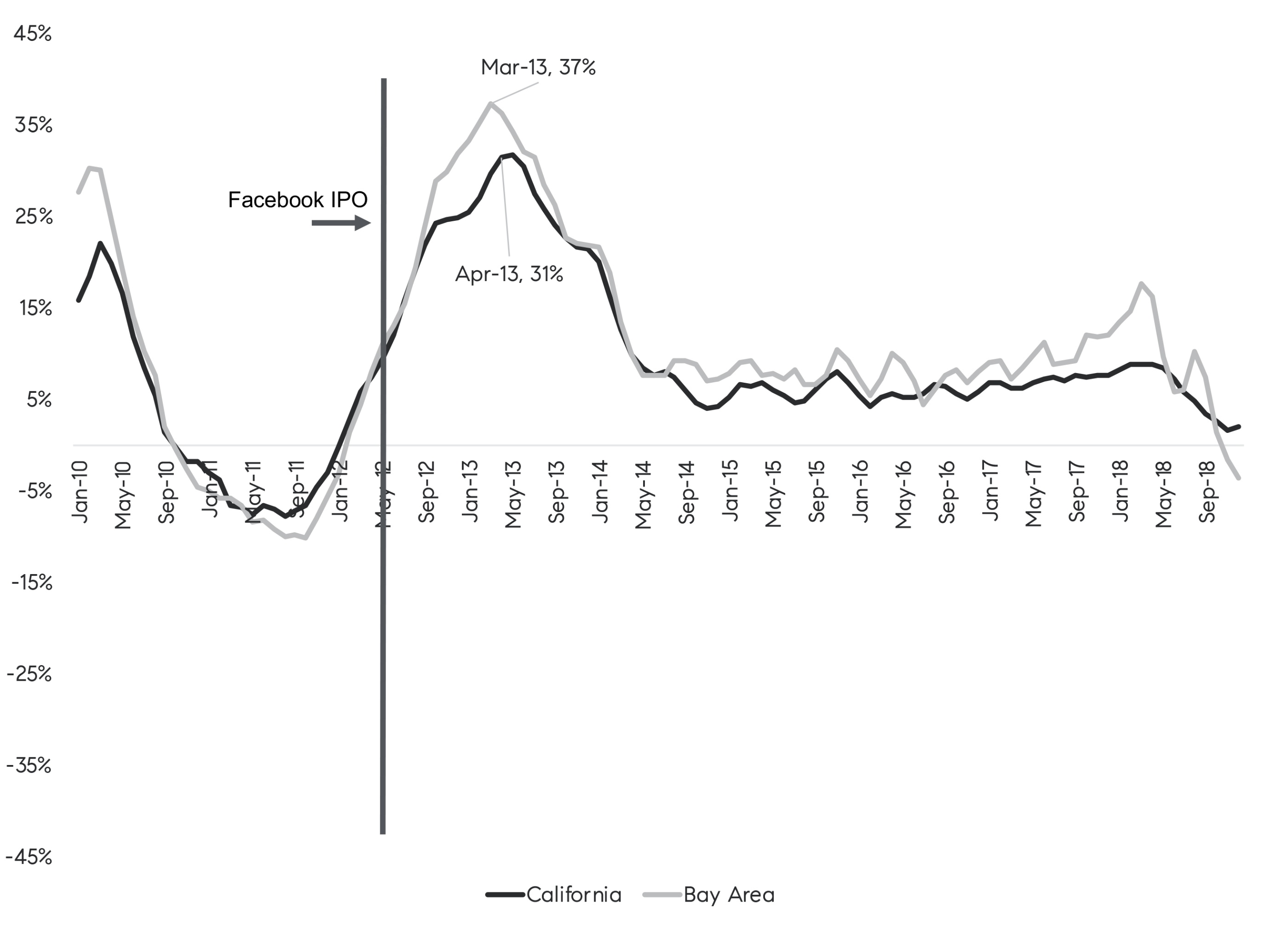 How IPOs work, and how they impact the housing market

How will these upcoming IPOs differ from those in the past?

Hepp believes the impact will be wide-ranging. Her research suggests that Airbnb, Uber, Pinterest, and Slack may collectively be worth more than $176 billion after they go public and could impact some 10,000 area workers. But the underlying market fundamentals again suggest a cooling market.

Unlike, say, Facebook’s 2012 IPO, which was an accelerant at a time when the economy was really starting to push past the recession, sales activity in the Bay Area is down—February sales numbers were 10 percent lower year-over-year in San Francisco, and 16 percent lower in the Bay Area as a whole—and housing undersupply is still a major issue. In addition, prices have risen significantly since 2012. Median home prices in the Bay Area are about 2.2 times higher today than they were seven year ago.

Recent studies trying to determine the impact of IPOs and Bay Area housing prices suggest that Carvajal’s hypothesis, which points to gradual, sustained impact, may be more historically accurate.

The study “Cash to Spend: IPO Wealth and House Prices,” released last November by academics Barney Hartman-Glaser, Mark Thibodeau, and Jiro Yoshida, examined 725 IPOs by California companies between 1993 and 2017, analyzing the impact public stock sales had on homes within certain distances of company offices, and how different stages of the IPO cycle impacted the market.

For the sake of the study, the complete IPO process is broken down into three distinct steps. First, a company announces it’s going to go public, known as the public filing. Then, it issues the stock on the actual market and gets an initial valuation, known as an issuing. Many companies place restrictions on how soon employees can sell stock after issuing, so there’s usually a third step, the lockup expiration, that occurs 90-180 days after issuing.

The authors of “Cash to Spend” discovered the impacts were front-loaded. Homes within a 10-mile range of a tech company’s headquarters rose by 1 percent when a company announced the IPO (compared to the value three months before), 0.8 percent when the company went public, and showed no additional gain after the lockup period. The issuing event had the most impact: housing prices went up 3.3 percent, 1.7 percent, and 1.3 percent for a 1-, 5-, and 10-mile radius, respectively.

That suggests tech workers were able to trade off future wealth almost immediately, and didn’t have to wait to cash their actual stock. The researchers concluded that California mortgage lenders, experts on the machinations of IPOs and tech financing, were familiar enough to lend as soon as it was clear the stock wealth was coming. In other words, the spigot of money won’t be turned on all at once.

Which San Francisco neighborhoods will feel the most impact?

Another recent study, conducted by Zillow, looked at the Facebook IPO in 2012 and examined the census tracts near the company’s HQ in Menlo Park. It found home values rose 20.9 percent in the year of the IPO, compared with 16.8 percent for surrounding counties without as many Facebook employees.

But the Facebook study offers a significant contrast with today’s market. With home values significantly higher, and new construction in San Francisco at its regular, sluggish pace—even for condos—there isn’t a flood of available inventory, nor are there an exceptional number of high-end, ultra-luxury properties on which to bid.

Despite the incredible overall wealth being generated, there are finite numbers of early employees and executives making, say, $10 million from these public offerings. Carvajal says he sees the medium end of the housing market, homes in the $3 million to $5 million range, feeling a slight bump, but believes the biggest impact will be homes in the $1.5 million to $3 million range, the “starter home” segment that has been so competitive lately.

Compass’s Carlisle believes Miraloma Park, Bernal Heights, and the Sunset, despite having limited housing stock in construction or development, will see the most of what he predicts will be a limited housing price bump, because what’s available is within that more modest, sub-$3 million range.

“These have homes within the range of well-paid, youthful high-tech workers,” he says. “If the pressure comes roaring back, it’ll probably be in those neighborhoods.”

But how long can this upward march of home prices continue? Carlisle points to 2015, when a famous Berkeley economist Ken Rosen, looking at the market’s instability and the city’s reliance on tech jobs, said that “there will be blood in the streets of San Francisco,” predicting a massive crash. The city’s housing market received a second wind shortly after that, and a new burst of appreciation and value.

Will new IPOs create a third wind in an abnormally long upcycle? The perpetual optimism of Silicon Valley, especially when it comes to stock prices, may finally reach the limits of the region’s already inflated housing market.