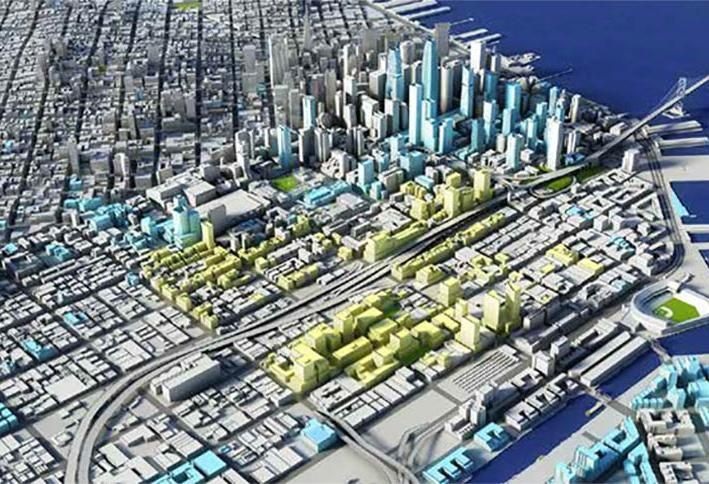 With the San Francisco Planning Commission’s unanimous vote of the Central SoMa Plan on May 10, the master plan has entered the next stage and will soon head to the Board of Supervisors for approval June 27.

Once the Central SoMa Plan is approved, developers are expected to push forward on residential and office projects that will dramatically transform the neighborhood. Developers, consultants and builders will discuss SoMa’s transformation and the impact Prop M will have on the area at Bisnow’s upcoming Future of SoMa, Mission Bay and Dogpatch event June 6. The plan, which spans 230 acres from Market Street south to Townsend Street and from Second to Sixth streets, would lead to 20M SF of development and $2B in public benefits. The new neighborhood would have over 8,000 housing units, of which 33% will be for affordable units, and commercial space for over 40,000 jobs. Building height limits would be raised from 65 feet to 130 feet. The neighborhood will grow up around the Central SoMa subway connecting the Bayview to Chinatown. “This is the only area to grow the office market going forward,” Cushman & Wakefield Northwest Regional Director Robert Sammons said. He said office vacancy is below 7% and there are very few large blocks of space left after the potential lease-up of the 750K SF Park Tower. He said big tech companies and companies even with a small tech component all want to be in San Francisco because of its access to top talent. The next big step after the plan’s adoption will be to rework Prop M to accommodate the office projects in Central SoMa, otherwise there will be less than 2M SF available, which would put a damper on any future Central SoMa office projects.

A proposed ballot measure would allow for 6M SF of office to be fast-tracked as long as the developer contributes to affordable housing or pays additional fees and would not fall under Prop M, which caps office space at 950K SF each year.

“That will go very fast once Central SoMa is passed and developers can move forward,” Sammons said. “Several are ready to go … and are just waiting.” TMG Partners wants to add 11 stories, or 165K SF, to its 505 Brannan St., which houses Pinterest's headquarters. Kilroy Realty plans to turn the Flower Mart into a mixed-use office development with 2M SF of office and a 125K SF warehouse facility. Other proposed developments include two residential towers with 907 units from Tishman Speyer. Even though the Central SoMa plan has taken a long time, investors have remained patient, Sammons said. “The market is strong in San Francisco and they expect it to remain so for some time,” he said. With so much capital out there looking for a place to land, gateway markets like San Francisco are still very popular. Central SoMa offers many opportunities for investment and development as well. “You’re not going to beat that location,” Sammons said. “It’s close to almost everything.” The development in Central SoMa is expected to take 10 years to 20 years and several cycles. He said he expects two or three office projects to be part of initial developments and more housing and residential to be built than office. Learn more about the Central SoMa Plan and Prop M at Bisnow’s Future of SoMa, Mission Bay and Dogpatch event June 6 at Parc 55 in San Francisco.